Spices are the backbone of Indian cuisine. Fragrant homemade spice mixes can make a lot of difference to flavour of the simplest of dishes to the most complex of recipes. Garam masala powder (Indian curry powder), ground coriander, ground cumin, red chilli powder, ground turmeric are used daily in Indian dishes.

Cumin is a light brown spice that is used both whole and in its powder form. It looks similar to caraway seeds. It is commonly used in Asian, Mexican, Indian and Middle-Eastern cuisines. Cumin has an earthy flavour and is also used in spice mixes like the Indian garam masala. Cumin is roasted on low heat to release its warm, earthy flavours.

Cumin has generated a lot of interest in recent years due to its perceived health benefits like aiding weight loss in women, reduction of cholesterol as per this study as well as in reducing blood sugar as this study suggests. Cumin helps with digestion issues. In India, it is commonly boiled with water and then this water is taken to aid digestion.

What is Cumin used for?

Both whole cumin and cumin powder are used in recipes. It is used as a spice in spice mixes like garam masala. Cumin powder is also used as a spice in raitas. It is used as a dry rub or in marinades of both meat and vegetarian dishes. It is very commonly used in tempering dals or lentils. When using whole cumin add it to oil or masala paste right in the start of the cooking to release its flavours. Hence you need to use larger quantities. Ground cumin is more intense in flavour and is used in smaller quantities comparatively.

Here are some recipes that use cumin or jeera powder:

What is shahi jeera or black cumin?

Shahi jeera or black cumin is darker and longer and belongs to the cumin family. Unlike regular cumin seeds which are used quite often, shahi jeera is considered more intense in flavour and is used in specific dishes like kormas, biryanis, tandoori dishes and those from Mughlai cuisine.

Here’s how to make cumin powder at home: 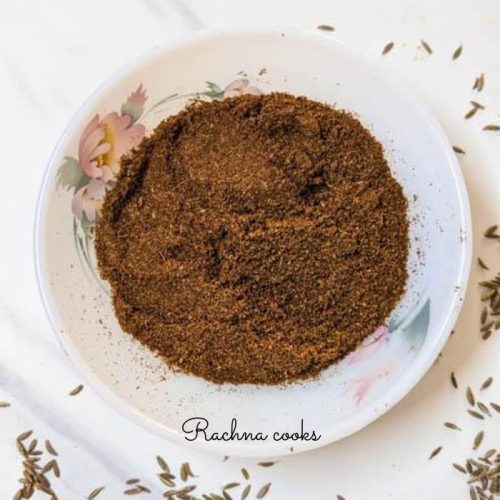 How to Make Cumin Spice Powder

Heat a skillet and toast cumin seeds on low flame till they darken in colour to a nice toasty brown.

Cool and powder in a blender for your homemade ground cumin. Store in an air-tight jar.

It is super easy to make cumin powder instead of using store-bought powder. Do try it. Makes a world of difference to your recipes. You can also check out how to make coriander powder here. These two spices are used in tandem in a lot of dishes.

If you liked this post, I request you to give it a star * rating. Thanks.

How to Make Thick Curd/Yoghurt at Home —...

This post is helpful but what about shahi jeera? What is the difference and how is “regular” and shahi cumin used? Great post!

Thanks Alonna for liking the post. I have updated it with the information on shahi jeera. Will also click a picture and upload. 🙂

Hi, I am Rachna Parmar I am a certified nutritionist, an avid home cook, a health coach and a fitness freak. I help you eat healthy and be fit. Cooking must not be difficult and complicated hence my recipes are detailed and personally cooked by me multiple times. Check out my healthy Airfryer recipes, vegan recipes, keto recipes and so on. Let’s eat healthy together.